Hello lovelies, how is this first day of January 2019?

Many of you would argue that 2018 was a bad year, but was it really that bad?

Let’s make a list of the good things that happened in 2018.

…and one last one, just for luck (our favorite story of the year

. There is now a giant 600-meter-long boom in the Pacific that uses oceanic forces to clean up plastic, and you can track its progress here. Despite a few early setbacks, the team behind it thinks they can clean up half the Great Pacific Garbage Patch in the next seven years 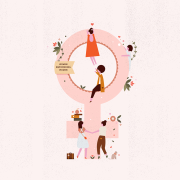 Hello readers Welcome to the GIRLS OF WISDOM PAGE, it's about love, for love and with love. xoxo you know you love me. Girlsofwisdom